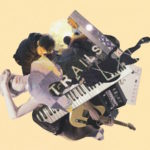 German prodigy, TRAILS, has been a SoundCloud darling over the last two years with his remixes of RL Grime, Flume, and Bring Me The Horizon racking up millions of plays collectively. Shifting to focus on establishing his melodic project even further, the European producer comes forth with his first original in two years, “Hold Up,” featuring up-and-coming vocalist, Rromarin, via CloudKid. Always keeping his dreamy, melodic tinge intact, TRAILS concocts a unworldly assortment of chimes, trap horns, and wavy synths that demonstrates the producer’s creative prowess and his ability to translate the sound of his remixes to originals.

Spencer Brown turns Ilan Bluestone’s ‘Will We Remain?’ into a 2.0...