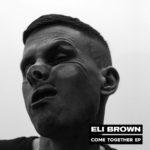 Eli Brown continues his upswing of global house grooves with his introduction to Alan Fitzpatrick’s label We Are The Brave, showing off the Bristol producer’s refined production chops and affinity for good old fashioned rave fare over a three-track heater.

Landing via Dancing Astronaut ahead of the project’s full release, the title track gives fans an appetizing look at Eli Brown’s darker tastes and tendencies.. While the UK producer’s sound has ebbed and flowed between bouncing house beats and peak-hour rave cuts, “Come Together” is a clear commitment to the latter. Brown’s drum ‘n’ bass roots also remain as evident as ever, as he utilizes deep, dimensional 909 kicks and crisp hi-hats before allowing the real star of the show to take stage. Keyed synths walk the line between melodic and menacing, ultimately concocting a tonic that’s as thirst-quenching in a dark, dank club as it is on a festival stage.

The Come Together EP can be pre-ordered here and is out in full September 13.