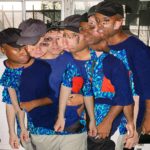 TNGHT are officially back. It has been seven years since Hudson Mohawke and Lunice first came together under the TNGHT banner. The duo’s bombastic beats and larger-than-life sound largely helped propel trap music to popularity, while also informing the decade’s early hip-hop trends. As quickly as they came together though, TNGHT receded into radio silence about a year after their self-titled debut EP—until now. After a steady drip of singles this fall, TNGHT is back with a long-awaited follow up, aptly titled II.

Ahead of the EP came “Serpent,” “Dollaz,” and “First Body,” and now the full eight-track collection is available via Warp Records / LuckyMe. What’s more, the pair have also announced their live comeback, appearing in NYC before year’s end, followed by a limited run of 2020 dates across Europe. See TNGHT’s full itinerary and listen to their latest, II, below.